It builds a single .jsx file from a script split in several *.jsxinc files using the #include pre-processor instruction.

It is also able to automatically build any associated jsdoc from the script if jsdoc is available on the system.

It comes with both a nice Graphical User Interface, and a Command Line Interface to make it also easy to use in your scripts and automation processes. 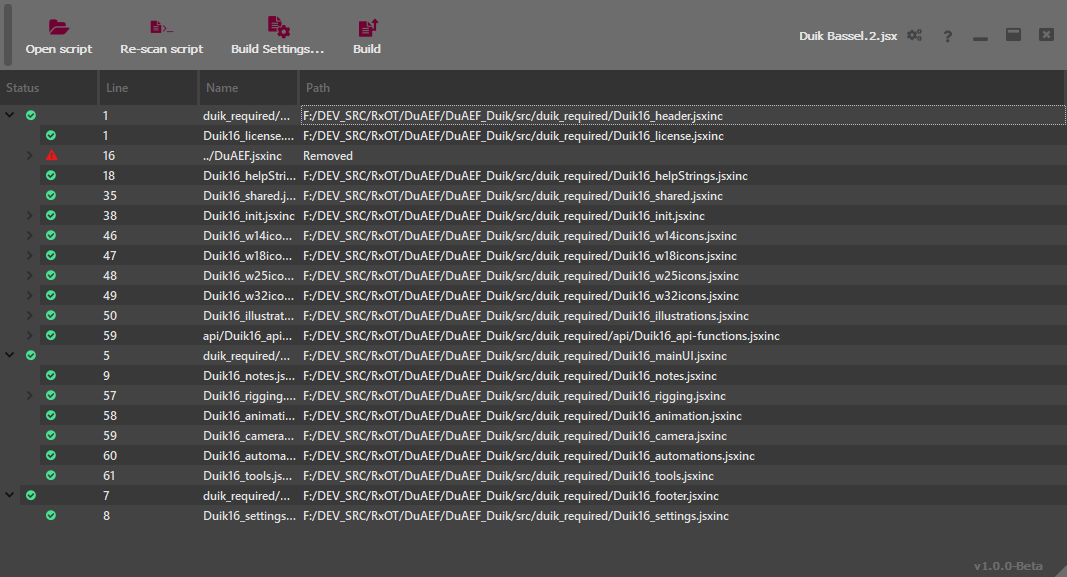 DuBuilder is a native app coded in C++ with Qt, available for Windows, Mac OS and even Linux for those who want to write their Adobe scripts in a better environment (using a virtual machine to run them) - that’s what we like to do at Rainbox Laboratory, to stay in a free (as in freedom) and safe environment.

What it doesn’t do

DuBuilder is not able to obfuscate your script, nor convert it into a .jsxbin obfuscated file. At Rainbox Lab. we don’t need this as we open source all our tools, and we strongly believe that letting the users access the source code is important to make the world better. No matter what, your scripts will be cracked, so why would you prevent everyone from learning, and being able to use their tools as they wish?

DuBuilder is not able to minify your scripts nor remove the comments. Minifying scripts and removing comments do not improve their performance in any way. It is true that minifying will make the file much smaller, but it’s quicker and easier to just zip the script to make the file as small as possible when distributing it, it’s not really useful to minify it.

That said, the file built by DuBuilder is a very standard .jsx file, so you can use your own tools to obfuscate and minify it if you wish.

Copyright (C) 2020 Nicolas Dufresne and Contributors.
This program is free software; you can redistribute them and/or modify them under the terms of the GNU General Public License as published by the Free Software Foundation; either version 3 of the License, or (at your option) any later version.

This program is distributed in the hope that it will be useful, but WITHOUT ANY WARRANTY; without even the implied warranty of MERCHANTABILITY or FITNESS FOR A PARTICULAR PURPOSE. See the GNU General Public License for more details.

You should have received a copy of the GNU General Public License along with DuBuilder. If not, see http://www.gnu.org/licenses/.

Copyright (C) 2020 Nicolas Dufresne and Contributors.
Permission is granted to copy, distribute and/or modify this document under the terms of the GNU Free Documentation License, Version 1.3 or any later version published by the Free Software Foundation;
with no Invariant Sections, no Front-Cover Texts, and no Back-Cover Texts. A copy of the license is included in the section entitled “Documentation License”.